Christmas in the C-Wing 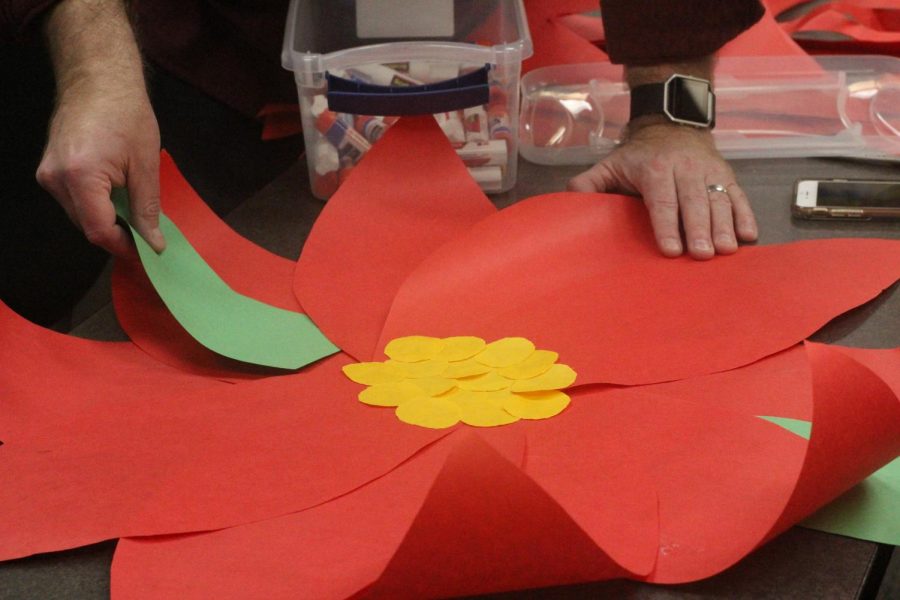 In preparation for Christmas, Spanish club is putting together wall decorations for the B wing. Even though her knowledge of poinsettias was questioned by Jaime Breisch, Missi Christoferson (‘18) constructed one that inspired Señor Duskin to experiment with the placing of the leaves.

“No one in German wants to be in the club,” Breisch explained.

Instead of giving up on foreign language clubs, she joined Spanish club to create German-Spanish Club. They meet in Señor Duskin’s room every Wednesday.

This Wednesday, November 22, three people showed up to help create decorations for the “Culture Street” themed hallway, in preparation for the Holiday Season.

“They pretty much just copy us,” Duskin replies, “or we copy them.”

As they continue to cut and create poinsettias out of construction paper, they brainstorm ways Christmas is different in Spanish culture.

“We could hang christmas pickles from the ceiling!” Hanna Novy (‘18) shouts with excitement.

Christmas pickles are ornaments hidden deep inside the branches of the Christmas tree. The first person to find it gets to open presents first.

Breisch explains how there is a witch in Italy, Befana, that comes the night of January 5 to give children more presents if they had continued to be good.

Duskin notes that the Three Kings are important in Spanish culture.

Three Kings Day is on January 6. The night before, children set out their shoes so that the Kings know how many children there are, and thus how many presents to give.

In the end, the group collectively agreed to work on it more on Monday, and hope they find creative ways to decorate their hallway.