What’s Up with Climate Change? 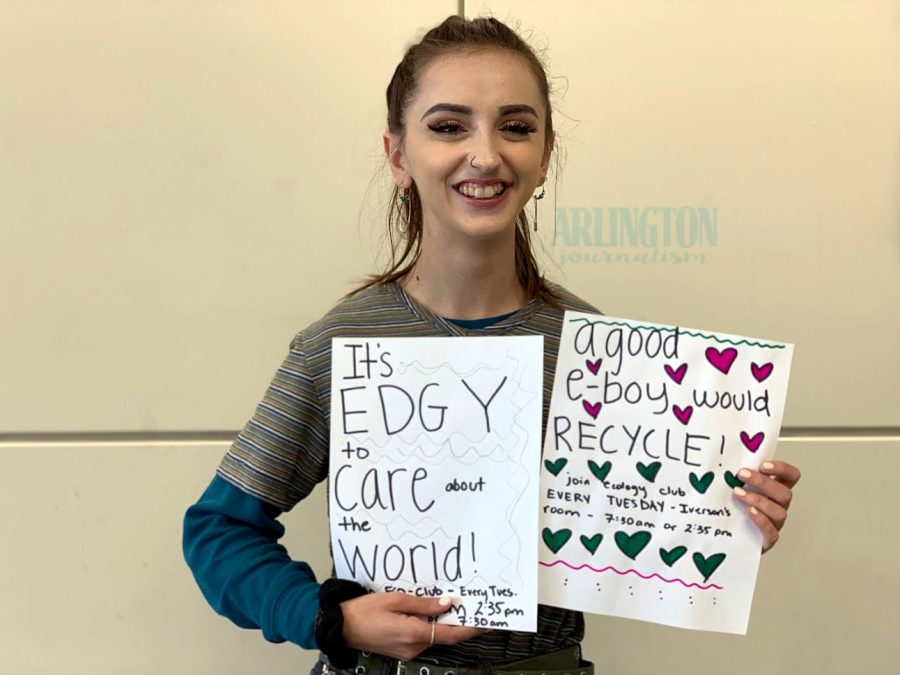 Ivy Ewing, a senior at Arlington Highschool plays many roles at AHS, but one she’s most passionate about is Ecology Club. As president, she is dedicated to helping the environment and wants you to be involved alongside her. When it comes to the environment on a global scale Ewing says, “We set examples for other countries, if the U.S. doesn’t care than others won’t care.”

It’s no secret that climate change has become one of the hottest topics of debate this year. You see it everywhere with hydro flasks, key-chain metal straws, eco-friendly containers, and possibly going vegan to reduce greenhouse gases. Currently, most scientists agree that climate change is real and that humans are the main cause of it. According to Susan Callery at NASA, [https://climate.nasa.gov/evidence/] ocean acidification, extreme weather events, rising sea levels, and an overall increase of global temperatures are all real and measurable impacts of human activity on the environment. So what is being done to combat climate change and who is leading the conversation?

Well, it might not be who you would expect. One of the leading activists for climate change right now is a 16-year-old girl named Greta Thunberg from Sweden. She has sparked controversy with her #Fridays for future, where she strikes every Friday from school to protest the limited amount of support she is currently receiving from the government. On September 18, Greta gave a moving speech, reflective of Martin Luther King Jr.’s “I Have a Dream” speech, where she addressed Congress telling them of the urgency of climate change. Besides the U.S., Greta has also given several speeches to other nations around the world. In one of her most recent speeches on September 23, she addressed the U.N. saying, “People are suffering, people are dying, entire ecosystems are collapsing. We are in the beginning of a mass extinction and all you can talk about is money and fairytales of eternal economic growth.”Greta’s speeches are not meant to sugarcoat the problem or even to create hope, her mission is instead to get people to act.

When asked about Greta Ivy Ewing a senior said, “Honestly I feel her quote was extreme and accurate. America is very fixated on money, we won’t get rid of fossil fuels because we fear we might lose jobs when in reality we could get more jobs through conservation methods.”.

In contrast, Brent Copenhaver an AP Government teacher at AHS said Greta’s quote was, “Very extreme, nonsense. Personally, I think she has a mistaken view of the situation, I think her beliefs and policies will lead to worse situations around the world. Would probably impoverish and kill more people than global warming every possibly could.”

All in all, Greta’s quotes and comments are quite extreme, Greta is not afraid to let the world know of the issue at hand. Even so are Greta’s startling statements fact or simply an exaggeration? Well, research done by the World Health Organization said that more than 250,000 people will die each year due to the effects of climate change between 2030 and 2050. Even though this estimate seems large, The New England Journal of Medicine said this estimate is actually rather conservative because it does not include, “population displacement and reductions in labor productivity” [https://www.livescience.com/64535-climate-change-health-deaths.html].

In the end, these are just estimates, we really don’t know what the true impacts of climate change will be. However, at AHS we want to be committed to helping the environment in any way that we can that’s why Ecology Club is working to “Encourage recycling, promote sustainability on campus, and overall create a school culture that is environmentally conscious.”